Storing Your Cell Phone In Your Bra Is Convenient, But Is It Smart?

A trend among girls and young women is keeping their cell phones tucked into their bras. What could be more convenient? There are even bras with pockets sewn in to fit your cell phone. One popular model is the JoeyBra, designed by college students in a business plan competition. Other models include a sports halter with a cell phone pocket in the front – the ultimate in convenience for jogging, and tennis.

Studies have shown that women’s breasts, especially in young women, are more susceptible to radiation damage than other parts of the body. Some women are even forgoing traditional mammograms in favor of thermographic imaging to lessen exposure to radiation for their breasts. Put two and two together and it makes absolutely no sense for women to keep their cell phones nestled between their breasts. Is there a connection between cell phones and breast cancer? Some doctors are beginning to think there is. And some women are finding this out the hard way, discovering that breast cancer has developed right where they’ve been keeping their cell phones.

One of these women is Donna Jayes. Diagnosed with breast cancer at age 39, doctors were puzzled. They found no genetic predisposition or other risk factors, and furthermore, she is Asian, a group with significantly lower breast cancer occurrences. After studying her case more thoroughly, two cancer specialists, Robert Nagourney and John West, learned that for ten years Donna had been toting her cell phone in her bra. They suspected this as the cause of her breast cancer. The pattern of the cancer and distribution of the cancer cells lined up perfectly with the shape of her cell phone where she had been keeping it.

Another breast surgeon, Lisa Bailey, suggests that phone-related breast cancer may be common. “There’s no evidence [that cell phone radiation causes breast cancer], but that’s because we haven’t studied it,” she said. She added that she would never wear a cell phone immediately next her body and would advise all women not to do it. Surgeon John West concurs and suggested that men might also be getting breast cancer by putting phones in shirt pockets.

The wireless industry claims that cell phones are safe to use and carry, but if we read the fine print in cell phone manuals, most of them warn to keep the phone at least 5/8 inches from the body. At a little more than a half-inch, that’s more than most cell phone cases provide.

However, independent researchers warm that the industries 5/8” recommendation is a gross underestimate, but it’s telling that even cell phone manuals indicate there may be a danger of EMF radiation exposure.

Even though the wireless industry continues to claim that cell phones are safe to use and carry, if we look closely at the fine print in cell phone manuals, we’ll see that most of them warn us to keep the phone at least 5/8” away from the body.

Independent researchers state that the 5/8” distance the industry indicates is a gross under-estimation of the safety standard that should be warned about; but it’s telling that even cell phone manuals make an indication that there may be danger in cell phone use. 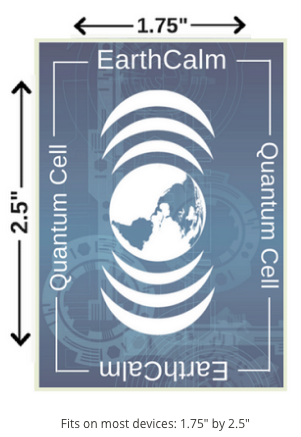 The Quantum Cell is thin enough to fit between your cell phone and its case.

The Quantum Cell is thin enough to fit between your phone and many popular phone cases. How does it work? It transmutes your phone’s EMF field into a protective shield. People who are electrosensitive (acutely affected by EMF radiation) have reported an immediate sense of relief with the Quantum Cell.

For more information about EarthCalm’s Quantum Cell, please click on the banner below: